The incorrect prescription and/or over-prescription of antibiotics for the treatment of every disease can be partially attributed to the excessive demand for antibiotics in the last halfcentury. As to be expected, antibiotic-resistant strains of bacteria developed within a year of introduction of penicillin in clinical settings [1].

It is now well known that antibiotics must be used with caution to ensure that the chemotherapeutic advantages of antibiotics against microbial infections are retained. However, to maximize these advantages, other approaches to microbial disinfection must be adopted in combination with the conventional methods [2]. Especially Lyme disease is such an example of misuse of antibiotics. In an advanced stage of the disease antibiotics are of limited use since most of the bacteria are either intracellularly located or in places were antibiotics are ineffective like in biofilms. 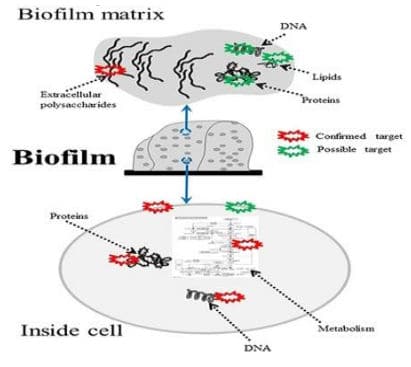 With our approach it is possible to kill borrelia, regardless what strain and where they are located, because they are sensitive to heat and we heat the whole body. So, if we bring up the body temperature up to 106,4 °F and keep this temperature over 2h on this level, all borrelia are dead regardless where they are located (brain, muscles, ligaments, tissues). We further know, that antibiotics are activated in their activity, when heated Ceftriaxone for instance per 2°C 16 times. So, if we combine heat and antibiotics, we can achieve a much higher response, than with each modality alone. We call this combination therapy “Antibiotic Augmented Thermoeradication” (AAT) and this approach is very successful in chronic Lyme’s disease (LD).

But quite often LD is associated with coinfections and unfortunately the AAT approach was not equally effective against coinfections with Bartonella, Babesia and others. So, to help Lyme’s patients not only get rid of their borrelia, we were searching for another alternative, which we found in an antimicrobial photodynamic therapy (APDT). This is an alternative therapy indicated for a broad spectrum of microbial infections, especially those we usually find as coinfections in Lyme’s disease. The combination of AAT in LD, combined with APDT enables us now within 3 weeks to free patients with LD not only from their borrelia, but also from their coinfections, especially Babesia and Bartonella. Furthermore, we can treat with this approach also virus and fungal infections, as well as parasites. Our APDT system 1was just approved to treat Corona patients in a clinical trial. But before I explain how it works, let us have a look on the history of PDT.

Photodynamic therapy (APDT) has been in application for over 1000 years across Egypt, India, and China; however, only little research had been conducted on it until the 1960s. Using microbial cells, Oskar Raab and Hermann Von Tappiener made the first demonstration over 100 years ago when they noticed that cells of Paramecium spp. stained with acridine orange were destroyed upon exposure to bright light. Since then, APDT has primarily been developed as a treatment for cancer, ophthalmological disorders, and for use in dermatology. We use it, successfully, for 30 years in our hospital for cancer treatment and will do this also in the future. However, in recent years, our interest in the antimicrobial effects of APDT has been stimulated due to the rapid emergence of antibiotic resistance among pathogenic bacteria, especially the coinfections in Lyme patients. Moreover, we found APDT as a therapy effective for a large variety of microbial infections and parasites [3-7]. APDT provides significant advantages over the existing antimicrobial therapies. It appears to be equally effective at killing both multi-drug resistant microbes as well as native bacterial strains. Furthermore, the effect of APDT on microorganisms is much more rapid as compared to that of other antimicrobial agents, and there is no evidence of APDT resistance until date [8].

The APDT technique uses a non-toxic compound to cause cell death, a process called lethal photosensitization, in which microbial cells are pre-impregnated with a photosensitizer dye (PS), in our case we use Riboflavin a B-Vitamin. Riboflavin, i.e. vitamin B2, has already been known to generate singlet oxygen upon UVA irradiation [9].

Recently, Riboflavin derivatives were substituted with up to eight positive charges, which showed a massive improvement in photodynamic efficacy [10] and therefore, are now very effective in wide antimicrobial activity. Our Riboflavin derivative shows absorption in the UVA/blue spectrum (≈ 350–470 nm) and singlet oxygen quantum yields between 0.7 and 0.8 [11-14].

After sensitization, respectively after IV infusion, Riboflavin is deposited on the target organisms (bacteria, viruses, fungi and parasites) and transforms there into molecular oxygen and into reactive oxygen species (ROS), which have a cytotoxic effect on microbial cells. During this process Riboflavin reacts on exposure to a specific wavelength of light, for instance blue and acquires an excited state through the transition of electrons to a higher energy level. In this excited state, Riboflavin can interact with molecular oxygen to initiate the formation of ROS (process type II) or interact with other molecules as an electron acceptor to produce hydroxyl radicals and other organic radicals (process type I) [15-19]

The products generated in these reactions can cause various damages to components of microbial cells or can alter their metabolic activities irreversibly, thus resulting in death [20]. In general, the principle of the therapy is that the energy absorbed via intracellular photosensitization is transferred to the oxygen molecule to cause severe damage to the oxidative reaction pathways [21] in the plasma membrane and to the genetic materials of the microbial cells, without exerting any toxic effects on the host cells themselves [22].

All the available evidence suggests that even multi-antibiotic resistant strains are as easily killed by APDT as naive strains, and that bacteria and virus will not readily develop resistance to APDT.

So, in summary we have integrated in addition to our successful eradication of Lyme ́s disease (LD) with AAT another effective nontoxic tool to eradicate microbes respectively the coinfections successfully and help patients in a perfect way to get rid of their infectious and toxic load. Instead of using more poisons in form of antibiotics as famous Lyme literates do and cause more and more serious side effects, we have developed now an almost nontoxic way to help this poor patient. I like to emphasize again, that the basic principles of APDT are relatively simple and assure reliability and efficiency. This technique can be highly effective only then if it is ensured that, during the execution of phototherapy, all the necessary components, i.e., the perfect dye, oxygen, and laser light, are present in sufficient amounts to cause damage to the target cells [23]. We have for AAT and ADPT in Lyme Disease and the co-infections the perfect set-up and have proof that it works excellently and revolutionary. A new future for LD patients has begun.